The Queensland Law Society has warned its solicitor members of an attempted  trust account scam that had been brought to the Society’s attention. 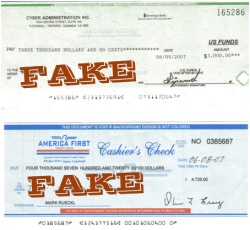 A Queensland law firm had been contacted by individuals who purported to be associated with a large international company trying to recover outstanding debts from Australian companies. The law firm was instructed not to contact the debtor company.

The firm soon received a cheque in part payment of the purported debt. This cheque, which appeared to be issued by an American bank, was banked by the firm to its trust account on a “collection basis”. The firm then advised the individuals that it would not make any payments against the banked cheque until the firm had received confirmation from the drawer bank in America that the cheque had been paid.

The law firm did not hear from the individuals again.

Since that original notification to the Law Society, another five law firms advised the Society that they had been similarly approached by individuals purporting to be associated with a large international company trying to recover outstanding debts.

Apparently this scam originally targeted American legal practices. There are a number of blogs which discuss the scam:

The Queensland Law Society has reminded solicitors that the best practice for banking a cheque drawn on a foreign bank is to bank it on a collection basis. The proceeds of the cheque will then not be credited to the trust account until the cheque has been paid by the foreign bank.

The Queensland Law Society is aware of one instance where a cheque drawn on a foreign bank was returned “unpaid” 18 months after it was deposited to a local bank account.

In the event of a foreign cheque’s being returned “unpaid”, the Society has advised that the amount debited to a solicitor’s trust account for the reversal of the original credit will be the Australian equivalent amount of the foreign cheque on the day of the reversal. According to the Society, this will“almost always be a different amount to the amount originally credited to the bank account”.

Categorised in: News
« Enzo Raimondo – Auction System’s Fair, You Can Quote Me
Did The Minister’s Dog Eat Hubby’s Homework? »