A Real Estate “Rant And Rave” From NSW

“Below you will find a rant and rave, if you feel the need to edit it to stop someone from being sued go ahead.” 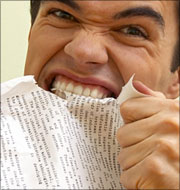 That’s how the incoming email began. It was from a very frustrated consumer who wanted to share with me and The Australian Real Estate Blog’s readers his recent real estate and conveyancing experience while trying to buy a property in New South Wales. His disturbing story has been edited a little, but the essential details of a very costly, and probably not unfamiliar, exercise remain as a lesson to all.

“My “Sydney Adventure” began with a domain.com.au search for properties within my price range. I stumbled upon an unusual “house”. Its features included 1 bedroom, 1 bathroom, inground pool, 1000sq mtr block and parking for 4 cars with “potential to extend and create your dream home”. Sounds weird? That’s what I thought. However, being curious, I inspected the property, made preliminary investigations and asked face- value questions of the agent who also happened to be the vendor. Funny how he had been comfortable referring to the vendor in the third person. Nonetheless his advertisement did mention “agent interest” which, apparently, is code for: “The agent selling this property has an interest in the current ownership, either directly or indirectly”.

The property for sale was on an allotment in a subdivision from the 1930s, and consisted of the one-bedroom-one-bathroom part of an original larger house, the garage, 85% of the driveway and the pool. The remainder of that house (with 5 bedrooms etc) was on the block next door. The original dwelling had been converted into two semi-detached residences divided by a block wall which looked sound, and was on the boundary line between the two lots.

I questioned the agent about the legitimacy of the wall’s construction, and was assured everything was fine. A small portion of the driveway, I was told, was on the other lot but would not prevent access to the garage. The location was exceptional, nothing but a national park at the rear, birds singing, it sounded romantic. So I decided to buy it. My intention was to extend the “house” into a quality home incorporating the existing pool and garage.

A price was agreed on. My solicitor reviewed the contract, conducted searches and everything got the green light. Contracts were exchanged with a 42 day settlement. I was excited and engaged an architect.

Along the way my architect wanted me to ask the vendor for the house plans. ‘If he doesn’t give them to you,” the architect said, “you can get them from the local council seeing the wall has just been built’. I left a message at the agent’s office about getting these plans.

Nothing came so I went off to the local Council. Or should I say funpark? Because it was here the fun began. The Council’s records showed the two lots as a combined allotment for valuation and rates purposes. I then got the bad news from the Council town planner, who had reviewed the application for the wall construction. After 15 months of to-ing and fro-ing between vendor and council, the Council had had a gutful and refused the application. The town planner, who was mightily annoyed that the vendor had gone ahead with the wall, said he would contact the Council’s enforcement officer to serve a notice because of this illegal structure. I still don’t know whether the wall was built before or after the Council’s dummy-spit.

I was understandably concerned with settlement only days away. When I informed my solicitor of the problem, he doubted me and assured me everything would be organised at settlement.

I had numerous subsequent meetings with Council staff to try to find a solution. However the problem was approached, I could see I would expose myself to serious legal problems if I proceeded with my purchase. The only way out was to cancel the contract.

So I instructed my solicitor to do this under one of the clauses. He had, by this stage, appreciated the extent of the problem and agreed that I was taking the correct action.

My $60,000.00 deposit was eventually returned. Then I got the solicitor’s bill – double his initial quote for a simple conveyancing job. Then the building inspector’s and the architect’s fee.

The financial and emotional cost was significant although not what it might have been had I settled the purchase.

I still have nightmares. Imagine having Council tell you to remove the wall and share your house with the people living next door. Imagine Council telling you that, although you did nothing wrong, you might have to demolish your house. Imagine someone taking you to court for trespass because, to access your driveway, you had to drive across their property (no right of way was in place). Imagine having to pay a Council “infrastructure contribution” of over $38,000 because only one contribution had been paid over the two allotments. The list goes on. ”