Retired Estate Agent’s “Meeting With the Past”

Vic Murphy was a former real estate agent and – scout’s honour –  one of the nicest, most decent blokes I have ever known.  Many years ago my wife and I bought a holiday unit on Queensland’s Sunshine Coast through his agency, Vic Murphy Real Estate.  We remained friends with Vic until he died in 2005.  Vic Murphy Real Estate still operates at Maroochydore and in the office window, along with the usual photos of properties for sale, is this Anzac Day story which I wrote (for a number of publications) about the remarkable man who founded the agency.

Every Anzac Day, retired real estate agent Vic Murphy would recall how he spent that day in 1945.  This former RAAF fighter pilot was at that time still feeling lucky to be alive after his Spitfire was shot down over Nazi Germany. 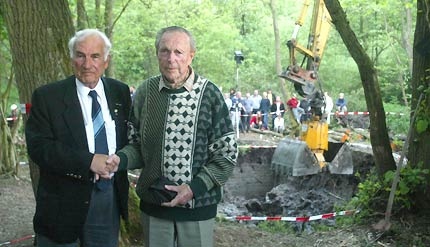 On April 25th 1945, with only a week or so remaining before the war in Europe would come to an end, 25 year old Vic was being held in solitary confinement in a 2m x 3m cell on a Luftwaffe (German Air Force) base.  “My bed was a table with a straw mattress on it,” he recalled.  In adjoining cells were British soldiers and a number of other fighter pilots.  But they were not allied pilots.  These prisoners were Luftwaffe officers who refused to fly because, Vic explained, “they were scared of our Spitfires and Mustangs, and because of their losses from our ground-strafing.”

In Vic’s case it was a matter of “just doing a job, flying for your country and doing the best you could.”  Which is how Vic Murphy modestly described his World War II service which effectively ended on April 19, 1945 during a sortie over enemy airfields in Northern Germany to ensure the few remaining Luftwaffe planes stayed on the ground.

Unfortunately some enemy aircraft were already in the air, and being flown by German pilots still keen to do their defensive job.  On that spring afternoon Flying Officer Murphy’s four-plane section found itself attacked and outnumbered by a formation of Focke Wolfe 190s which, he still suspects, were factory-fresh because they had no camouflage on their fuselage.

His later debriefing report for the Royal Air Force, to which he was attached, described one of the last aerial dogfights in the European theatre:

“I was in a steep turn attacking a FW 190 when I saw another FW 190 firing at me, but as his angle off was 60 degrees I did not think he could hit me.  But then my engine cut and I caught fire, so he must have hit me.  I bailed out and landed south of Wittenburg.”

Within minutes this unhurt but angry young airman was captured by German soldiers.  That night they marched him to Wittenburg where an officer interrogated him (“I gave only my name, rank and number,” reported Flying Officer Murphy), confiscated his maps, course card and aids box but let him keep his personal belongings.  Next morning he was taken to nearby Hagenow air base, handed over to the Luftwaffe and placed in solitary confinement.

His RAF report described the food he was given as “reasonable”.  There was “one good hot meal,” a stew with no meat but “plenty of vegetables” supplemented with three slices of bread and margarine.  The rest, he reported, was “not eatable.”

After seven days he and another prisoner were moved to a prison-of-war camp at Ludwigslust.  During their 30 kilometre journey there they found themselves strafed by Spitfires from Murphy’s own RAF Wing.  He had spent a couple of days at this camp with other allied officers, mostly Americans, when the German Kommandant anounced that the Russians were sweeping through Berlin, 150 kilometres to the south east.

Flying Officer Murphy’s report explained that the Kommandant said “he could leave us there to be captured by the Russians, or else he could take us north where we would be nearer the British forces.”

“We thought he was bullshitting and told him that we would rather stay and be captured by the Russians.”

Nevertheless the Kommandant was obviously concerned for the safety of his prisoners and guards because, at 2 o’clock next morning, preparations began for both groups to decamp and head north.

After some days on foot and travelling in horse-drawn vehicles, 60 allied prisoners-of-war, 30 guards and a number of guard-dogs reached the Schleswig-Holstein village of Labenz where the sound of tanks could be heard.  “The Germans told us they would leave us there until British forces came – and they did with 12 guards,” his report continued.  Next morning all guards had gone and, barely hours before the fighting ended, he and his fellow prisoners-of-war were rescued by Field Marshall Montgomery’s troops.

After the war Vic Murphy returned to Australia via Canada accompanied by his wife Ria who had served in the Royal Canadian Air Force. The couple had married when Vic was a Flying Instructor in Montreal before being posted to England.

Back home Vic operated a milk-bar, then worked for a brewery before going into real estate and opening his own office in Queensland.  Although they later retired to North Eltham Victoria, the Murphys regularly returned north by car for holidays.  Although Vic enjoyed the long drive each way, he never again flew an aeroplane.  “A good friend with a light plane sometimes takes me up and offers me the controls but no, I just don’t feel like it,” Vic said.

Then in 2004 – 59 years after his plane plunged into marshland near Schwerinsee, east of Hamburg – Vic received a surprise telephone call informing him that British archaeologists and members of a German historical society had found his wrecked Spitfire.  Almost before he had time to blink, Vic was on an all-expenses-paid trip to Germany to witness the plane’s excavation.   This fascinating event, which made news around the world, was broadcast live on British TV’s “Channel 5”.

All of a sudden everything came back to the amazed Australian who had been sitting quietly on a plastic garden-chair watching an excavator recover the wreckage from the bog.  “Every picture, every second, every detail,” he explained in a frail voice to a German reporter who later wrote of a fateful “meeting with the past.”

Vic was delighted to meet 71 year old Guenther Hintze from nearby Veelboeken who, as a schoolboy in 1945, had scavenged some of the scattered aircraft parts.  Also present to meet the honoured Spitfire pilot was 79 year old former Luftwaffe pilot, Werner Molge, who had been shot down himself in 1944.  Vic took this unexpected encounter with a former foe in his stride, recognising that both had been simply doing a job and recalling that pilots on both sides had held a lot of respect for one another.  As he told the German newspaper Die Welt:  “We spoke about enemy aircraft, the pilots were not our enemies.”
Picking up on this sentiment the same paper commented that the British Spitfire, shot down by a German plane, was “a symbol of the struggle against Nazi Germany.”

POST-SCRIPT:  “JUMPED A GERMAN JET”
“I didn’t do anything spectacular,” a humble Vic Murphy protested when I first approached him about his story.  Yet included in the photographs and documents he helpfully supplied was an account of his role in the shooting down of one of the Luftwaffe’s rarest aircraft – an Arado AR-234 twin-engined jet.
On March 2nd 1945, two months before the fall of Berlin, Flying Officer Murphy was leading a section of RAF 41 Squadron Spitfires based at Celle near Hanover.  He noticed a “dot ahead approaching tremendously fast.”  Within seconds it passed below his plane.  He glimpsed the German cross on its black fuselage, and realised it was an enemy jet.  He immediately radioed in his location, the compass bearing of the aircraft and its height.  This information was acknowledged by Flying Officer Danny Reid, a fellow RAAF pilot flying in his section.  Reid, who became a Franciscan Friar after the war, was able to dive on the jet, match its superior speed then shoot it down.

One less-than-official account of this action described how the two Aussies “jumped a German jet” with Reid “diving straight down, flat out, ignoring the risk of his wings coming off.”

“Danny succeeded in catching the bastard in a turn, fired at him point blank and gently landed him in flames …  We’d seen Reid’s plane after he landed:  his poor Spit’s wings were buckled like a concertina, all the paint had come off the surfaces, the rivets had sprung and the fuselage was twisted.”
Reverend Father Urban Reid, as Flying Officer Reid later became known, was awarded the Distinguished Flying Cross for his efforts.

[Tim O’Dwyer himself is a former RAAF Reserve Squadron Leader]

Categorised in: News
« Do What I Say, Not What I Do
First Home Owner Boost Extended »