What of worth could a suburban solicitor say to a bunch of hard-nosed building consultants about home-buyers’ building inspections? Well, lots. 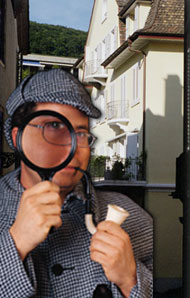 At the Institute of Building Consultants Information Evening, to which I’d been invited as guest speaker, I not only spoke about protecting real estate consumers (and building inspectors into the bargain) but also prompted considerable discussion and first-hand stories about house inspections.

This optional clause in the standard conditions provides in part:-

The last sentence, particularly if the inspection date is looming large, puts a lot of pressure on buyers and their solicitors. “And the building inspector,” came the cry in unison from the audience, who then swapped accounts of customers wanting last-day urgent inspections and of agents and solicitors who had not explained to buyers’ that time was critical under the clause. Never mind how unconscionable it may be to have such a cut-throat, sudden-death provision in a standard contract. Still my Law Society, while having described the operation of this part of the clause as “harsh”, had signed off on all the terms and conditions for the REIQ.

More than a few of those present had seen contracts where agents had ignored the inspection condition (which at least offered the buyer the chance not to be satisfied with the building report) and had inserted in its place a mischievous and deceptive “structural soundness” clause. This is where the buyer can only opt out of the contract if the report concludes that the dwelling is “structurally unsound”. Needless to say Queensland’s Office of Fair Trading advises that it has no interest in how licensed agents draft contract clauses. Scout’s honour!

Consequently I gave this simple suggestion to the Institute of Building Consultants: “You need to talk to the REIQ about educating its members and their sales staff on not messing with the contract and also making sure a reasonable time is allowed for building inspections.”

I then raised a couple of curly questions for building inspectors to consider, and perhaps discuss with their own legal advisers:

Going into the history of the standard residential contract, I explained that most estate agents have a passion for anything which makes sales easier, especially if no-one asks to see a solicitor before signing what will become a legal agreement. I noted that the REIQ believed this contract to be one of the fairest and most balanced documents produced. To my mind the prime purpose of the contact form is to serve the underlying philosophy of Queensland residential real estate sales: “What you see is what you get, and what you don’t see you may still have to take.”

What should be of most concern to all residential real estate consumers, buyers and sellers alike, is not the cunning fine print in the contract, or what should or should not be disclosed by sellers and agents, but rather the inaccurate details, contradictory dates and dubious clauses often recklessly written in by selling agents. Once agents have done their job simple sales contracts frequently become legal landmines, I said.

In telling the story of the standard contract I remarked that it had been less one of adoption and approval and more a grudging compromise between bodies with quite different values and expectations: the Law Society seeking a balanced and comprehensive legal document, the REIQ requiring an uncomplicated sales agreement which would not put agents’ commissions at risk. In my opinion, the REIQ and the Law Society had in the end failed to produce contract which gave purchasers the legal protection they needed.

The small print of an earlier REIQ/Law Society contract had at least contained this warning: “…it is recommended that the vendor and the purchaser consult their respective legal advisers prior to signing this contract.” Because this was deliberately omitted from the latest REIQ/QLS effort, the Beattie Government at my instigation legislated for a mandatory written warning to be attached as the front page of all residential contracts. Unfortunately, it remains an overly wordy warning to buyers only. Sellers, it seems, can take their chances.

Incidentally at one time the standard contract had contained a lengthy, but not easily found, warning to buyers about what should be contained in any seller’s building inspection report annexed to the contract. I noted that during the period of operation of that particular contract most conveyancing solicitors had seen only one or two deals where a building report had been annexed by a seller. Some members of my audience volunteered that they had done a few pre-sale inspections for sellers and still do so, but only rarely.

What concerned building inspectors greatly was whether they would be liable to any buyer who relied to his or her detriment upon a faulty report supplied by a seller to that buyer. “Could be,” I said.

Finally, I reassured my audience that an inspector’s job was not to investigate whether all structures had received necessary building approvals and inspections. This was the solicitors’ task. I then displayed a number of search results I had recently received. Many of these revealed outstanding slab, frame and final inspections. Needless to say the REIQ/QLS contract gives little redress to buyers who discover such outstanding matters.. Nor is there much joy, I added, if purchasers are able to identify building works which not only have not been inspected, but also have not received any original approval.

My closing words were:

“The first rule of real estate remains – buyer beware – but so too should the building inspector.”