Another Nail in the Auction Coffin

The Real Estate Institute of Victoria (REIV) has been forced to come clean, and to admit to consumers that “…no binding contract exists until the successful bidder and the vendor have signed a contract.” A proposed addition to the legislation governing the conduct of real estate auctions represents one more nail in the auction coffin.

In his weekly propaganda piece in the Domain section of The Age newspaper (Domain, The Age Saturday 9 February, 2008 p.3) CEO of the Real Estate Institute of Victoria, Enzo Raimondo, acknowledges the “…need to amend the law to ensure that when a property is knocked down to the highest bidder a binding contract exists and they cannot be gazumped by another bidder making a late bid.” 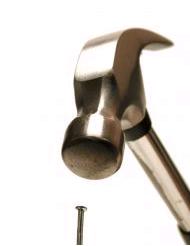 Remember when the REIV approved of “dummy bidding”?

Consumers are used to seeing the REIV backflip on its views about what’s right and wrong in the conduct of auctions. Remember when Enzo said that he did not know what “dummy bidding” was? And how the REIV defended this deceptive practice until change become inevitable? Only when the government is committed to the introduction of legislation does the REIV accept the reality of the situation and grudgingly agree that change is necessary.

So it is with the outlawing of late bids.

Enzo tells his readers, “While the REIV is considering the actual detail, the fact that action has been taken is a welcome step…a timely change to the law to ensure the highest bidder at the fall of the hammer is, in fact, the successful bidder will bring certainty to the auction process.”

The cry “SOLD” is a lie told

One element of certainty in all of this is the fact that estate agents (auctioneers) have been telling lies every time an auction was conducted. Just as the use of “dummy bidding” was a form of lying, so too the call “SOLD” was a lie. A truthful estate agent would have called, “You sir have offered the highest bid, and so the vendor will enter into negotiations with you. Of course, if anyone else would like to offer a higher amount before negotiations conclude, we would like to talk with you.”

Another lie – the crowd of bidders

At auction the estate agent tells the crowd that it is the “market”, and that this little market is going to determine the value of the property being auctioned. However, the truth is that there are only a few genuine bidders interspersed among the onlookers, including those who have fallen victim to the estate agent’s underquoting. In fact, there may be only 1 or 2 genuine bidders.

Any law declaring that a property is sold when the estate agent calls out “SOLD” will have to require the registration of bidders. Otherwise, an anonymous bidder will be able to just walk away from the auction and, as one cheeky fellow did on more than one occasion, jump on a bicycle and pedal off laughing. In such a situation the sale will be complete, but the purchaser cannot be identified or located. And if the property were put up for sale a second time, what rights would the first purchaser have? And what evidence would be necessary in order to prove that the bicycling purchaser had abandoned his purchase?

Estate agents are good at jamming two parties into a contract, collecting the commission, and then letting the parties fight the matter out through expensive legal action. Having a property sold on the call of the estate agent will make this problem much worse.

It’s not hard to imagine an estate agent, keen to get a sale concluded, declaring the property sold to a person who denies having made a legal and binding bid.

Who will play the role of umpire?

What will happen in the event of a dispute? Who will determine whether a verbal bid was made according law? Perhaps video recording of auctions, or “hawkeye”, third umpire, stump-cam, or similar devices will become necessary to help the estate agent in this umpiring role.

But then, would there be a conflict of interests if the commission-seeking estate agent is also the umpire? Perhaps a new industry will develop around auction umpires and electronic evidence capture.