Estate agents have a marvelous talent for redefining words so that their everyday meaning is distorted to the point that they become oxymorons. The use of the word “transparent” by Real Estate Institute of Victoria CEO Enzo Raimondo suggests that the transparent “window” offered to consumers is really a two-way mirror. 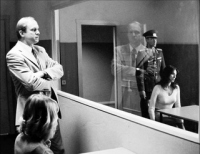 We have previous demonstrated the way in which estate agents have redefined common words to suit themselves. For example, the word “sale” as defined in the Exclusive Sale Authority document produced by the Real Estate Institute of Victoria (REIV) is defined so that a property can be regarded as sold (and the estate agent can collect a commission) even if the property is not sold. See also our blog posting on the term “ethics” at Maitland Horler Ethical Agents – An Oxymoron?

It seems that estate agents have now redefined the term “transparency” as it applies to real estate transactions, so that the term refers to a concept similar to that of the two-way mirror. According to Wikipedia, “A two-way mirror, also called a one-way mirror, is a mirror which is partially reflective and partially transparent. It is used with a darkened room on one side and a well-lit room on the other, allowing those in the darkened room to see into the lighted room but not vice versa.”

In a real estate transaction it is the consumer who sits in the well-lit room, while the estate agent occupies the dark side.

The two-way mirror concept came to mind as I read Enzo Raimondo’s comments in an article appearing at page 12 of the August, 2008 edition of Australian Property Investor. According to the article:

“Victoria has outlawed the unusual practice of placing bids after the fall of the hammer at property auctions.

New laws preventing auctioneers from accepting bids or offers after the property has been knocked down to the highest bidder came into effect at the end of June.

The person who was the highest bidder would be ‘safe in the knowledge that no other bids can be made on the property’, Raimondo said.”

First, it should be noted that the real estate auction is not really an auction at all. It’s a scam. As every lawyer, conveyancer and estate agent in Victoria knows only too well, when an estate agent hits hits the palm of his left hand with the rolled-up contract and shouts “Sold” he is telling a lie. The property has not been sold at all. The property has not been sold unless and until a contract has been signed by the two parties.

In in order to improve the transparency of the real estate sale process, the REIV declares to all real estate consumers that the procedure previously known as the real estate auction was not an auction at all. The process has never been anything more than a theatrical procedure designed to select a single purchaser from among a number of others, for the purposes of negotiating the sale of the property on offer. In future the process known as the “real estate auction” will be referred to by its correct title “buyer selection process”.

Instead, the real estate industry, in collaboration with the politicians and regulators over whom it is able to exert its extraordinary influence, came up with an extension of the auction scam.

The change in legislation had nothing to do with the protection of consumer rights, but everything to do with the protection of the auction scam and the estate agents who support it. Can anyone really see any benefit for consumers in forcing a vendor to accept anything but the highest offer for their property? Should a vendor be forced to forgo the highest offer, simply because the party offering it did not play according the rules of the auction scam? And remember who invented the “rules” – that’s right, the estate agent.

If a purchaser complains about being “gazumped”, or being cheated at a real estate auction it is because he or she was misled about the true status of the so-called auction. Misleading consumers, and forcing vendors to accept something less than the best price for their property is not “transparency”, it’s tragedy.

When Enzo talks of “transparency” he is describing only his view from the dark side of the mirror. What a pity the consumer doesn’t have the opportunity to shine some light into the dark place occupied by Enzo and those he represents.