At Loggerheads Over Seasonal Lodging

Contractual time limits which run out between Christmas and New Year should, as this Blog has previously shown, ring alarm bells for purchasers and their legal advisers.  Nevertheless, neither developer Bannercorp* Pty Ltd nor its solicitors heard so much as a tingle when a critical condition in Bannercorp’s time-of-the-essence purchase contract (dated 3rd August, 2007) was mutually extended from 90  to 150 days from the contract date.  This new deadline (for “lodging” Bannercorp’s Development Application) fell due on 31st December, 2007. 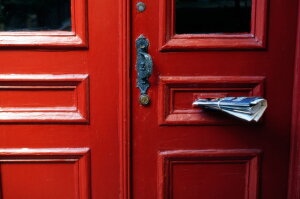 Meanwhile the vendors, Mike and Kate Moran*, realised that they had undersold their acreage property.  When another developer offered a significantly higher price, Morans entered into a separate contract with that purchaser – subject to the existing contract being cancelled by 3rd January, 2008.

Despite some eleventh hour argy-bargy about when Morans were contractually obliged to counter-sign the Development Application, by midday on 31st December Bannercorp had everything ready to lodge with the Council.

That Monday was not a public holiday in this rural shire, but the Council offices were closed for Christmas-New Year  – as they had since 21st December .  Undeterred, Bannercorp put its application (and  accompanying cheque) through a slot in the Council’s door around 4.20 p.m.

“As your client has not lodged the application on time, we give notice of termination”.

Bannercorp’s solicitors’ rejected the termination, and explained how the application had been “submitted to Council by its overnight mail box.”   Morans were unmoved.

Bannercorp soon lodged a caveat on Morans’ title before initiating Supreme Court proceedings.  The sole issue before the court was whether Bannercorp had lodged in time.  Council officers gave evidence that the application was “received” by their Records Department on 2nd January after having come through the front door slot.   Although the purpose of this slot was to allow correspondence with Council when closed, it was not an official mailbox.   The established procedure for collection of documents placed in the slot involved reception staff picking them up from where they had fallen to the floor, then onforwarding to Records.

Bannercorp’s lawyers’ simple contention was that the application had been lodged when placed through the slot.   Morans’ lawyers, on the other hand, submitted that “lodging” involves  two separate acts:  firstly parting with possession and, secondly, receiving into the possession of another.

The Judge began his judgement by affirming the “principle of objectivity”, and quoting from a recent High Court decision:  “The meaning of the terms of a contractual document is to be determined by what a reasonable person would have understood them to mean.  That normally requires consideration not only of the text, but also of the surrounding circumstances known to the parties …”

When this contract was both made and extended, the judge noted that the known surrounding circumstances did not include the Council’s end-of-year closure.

Dictionaries were consulted.  The Shorter Oxford English defines “lodge” not only as “get (a thing) into an intended place” but also as “deposit with an official”.  Butterworths Australian Legal Dictionary cites a N.S.W. case for the proposition that “lodgement requires a degree of physical acceptance of the person to whom the thing is given and is more than mere depositing with that person”.  That case considered whether an application posted to a Tribunal was properly “lodged”, and decided there must be “physical acceptance of the document by an officer of the Registry.”

In a similar case the question for a Federal Court was whether an application to a Refugee Tribunal was “lodged” when put in a box for such applications at a Detention Centre.  That application was held to be not lodged until it came into the possession of a Tribunal Registry.

Ultimately, the judge here ruled in Morans’ favour by finding that the contract term “lodging” connoted more than merely “depositing” at a particular location.  In the present context it also connoted depositing with a “depositee” to initiate an official process.  Consequently, some act or conduct by the Council was required for “lodgement” to be effected.

Bannercorp subsequently lodged (in time) an appeal against this decision…but did not proceed with that appeal when Morans’ lawyers required Bannercorp to give security for costs.

* Real names are not used in this true story which ran originally in Australian Property Investor magazine.