“We’ll All Be Rooned”, said Hanrahan

Echos of the well-known poem about Irish-Catholic-bush-pessimist Hanrahan* came out of the Australian Capital Territory when The Canberra Times reported eleventh-hour alarm over the likely ruinous effects of anti-gazumping real estate and conveyancing reforms which were to come into force on July 1, 2004.

*See full text of the poem 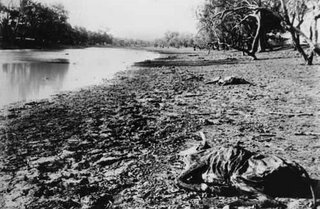 The unethical, but not illegal, practice of “gazumping” ocurred particularly in the ACT and still does in New South Wales in a rising sellers’ market where a deal is made, but before legally-binding contracts are exchanged, the owner sells for more to someone else.

In 2003 one Canberra lawyer said gazumped buyers were caused “much heartache”, “financial detriment” and “emotional stress”.

When ACT Chief Minister Jon Stanhope announced his Civil Law (Sale of Residential Property) Bill 2003, consumer advocates praised this as “a quantum leap forward” and called lawyer Stanhope “the hero of Australian real estate consumer protection.” The Bill was passed in August 2003, so ACT solicitors, agents and others had ten months to get ready.

Since July 1, 2004 residential sellers, before putting their properties on the market, have been required to have contracts pre-prepared along with “required documents”. These documents must include title, easement and restrictive covenant details, current building and pest inspection reports and, most significantly, an approval and inspection status report on the original buildings and any additions. Buyers are able to inspect this material before they sign a contract and still get a five-day (post-exchange) cooling-off right. Real estate agents’ role in contract preparation is largely and commendably limited to the insertion of the parties’ details, price, date and chattels.

The ACT Law Society’s Chief Executive described these changes as “a legislative sledge hammer”, although the Society’s President welcomed the advent of such mandatory “full disclosure” and the ACT Real Estate Institute supported the legislation’s intention and direction.

Auctions have been cleaned up in the national capital with compulsory bidders’ registers, banning of dummy bidding and the allowance of only one disclosed seller’s bid. When these reforms were announced one Canberra agent warned, like Hanrahan, that auctions could become a thing of the past. The Real Estate Institute, on the other hand, believed the “workable” new rules would reduce dummy bidding.

Some ACT real estate agents warned, like Hanrahan, not only that an overloaded and backlogged system could result from more people seeking building and pest inspections, but also that hundreds of properties could be pulled off the market. The government promptly assured folk with properties already for sale they would not be caught out if genuine attempts were made to comply with the disclosure legislation.

At the same time a Canberra conveyancing solicitor also warned, like Hanrahan, “Gazumping will continue virtually unchanged.” Despite super-supreme seller disclosure, buyers who needed time to arrange finance before exchanging contracts, would still remain vulnerable to being gazumped during that period because of a closed culture in real estate and conveyancing. Contracts could not be made subject to finance approval within a reasonable time because one-eyed agents and inflexible solicitors would still “simply recommend to the seller not to accept such clauses in any circumstances.”

One solution this lawyer proposed was for the government to introduce “mandatory subject to finance clauses.” “Clearly a cultural change must be legislated,” he explained. Tough call.

On the other hand, an L.J. Hooker agent believed the new auction rules would eliminate dummy bidding, and was confident the new “highly positive” disclosure laws would not only raise the integrity of the real estate industry but also benefit its image. He foresaw a positive effect on the market.

On last reports from the ACT no-one has been “runed”, real estate sales and auctions have not ground to a halt and conveyancing solicitors, auctioneers and agents are doing nicely, thank you very much. Perhaps there has been a non-legislated cultural change.