My Law Clerk “Lucky Phil” who not only picks the occasional winner at the races, is also my husband, devoted servant and settlements clerk. Together we run a small suburban law practice. 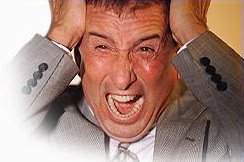 Fortunately we take very few conveyancing matters – most notably because Conveyancers have financially white-anted the entire conveyancing business by purveying and subscribing to the misguided notion that Conveying property is merely a clerical exercise which does not require the expertise of lawyers.

Recently my clerk left the office at 9.30 am, caught the train to the city loaded up with three settlement files each set down 30 minutes apart. Lucky Phil’s instructions as usual were ‘Whatever it takes – do what you have to do to settle’.

Settlement number one was scheduled for 11.30 am. Lucky Phil thought this settlement would be a piece of cake. Not only did we act for both the vendor and purchaser (a related transaction) but with Title in hand and being 15 minutes early he was of the view he had covered all contingencies.

Upon arrival at the Wink Wink Bank Lucky Phil was advised they had no record of the booking. But wait, “We will check our computer for you” advised the helpful desk clerk. ‘Oh she explained that settlement is to take place at the Nudge Nudge Bank of Australia’. Perplexed by the advice and dumbfounded that given the lender was Wink Wink how could the matter be settled at Nudge Nudge? Lucky Phil nevertheless kept his cool and hotfooted the necessary 8 city blocks to Nudge Nudge.

The trip from Wink Wink to Nudge Nudge was obviously a hurried exercise however he managed to arrive on time for settlement. Lucky Phil could not help noticing that settlements were falling over all around the room. A common problem being out of date Goods Statements from the State Revenue Office (“SRO”). Lucky Phil however was confident in the knowledge that his documents were all up to date particularly knowing that in anticipation of a difficult settlement his documents had been assessed and endorsed by the SRO prior to settlement.

The first crushing blow for Lucky Phil was when the Wink Wink Settlements Clerk rejected the transfer of land. “We require a stamped transfer not an endorsed one” she advised. In a state of despair Lucky Phil called the office with the news that his first settlement was falling over and that we should check with the File Manager in Adelaide (“Madam Lash”) to discuss the matter. Several expensive, heated and futile mobile telephone calls later I was advised that in related transactions such as these stamp duty needs to be pre-paid. “Well that’s great” I advised, “The client has borrowed $350,000.00 from the Bank which includes the stamp duty. We are here to settle and collect $325,000.00 which represents the balance after stamp duty, lodging fees and bank robbery charges etc.” “How do we pay the stamp duty when the Bank holds all borrowings?” I logically asked. “Your client should have taken out an overdraft before settlement” she replied.

Heading to the next settlement Lucky Phil had only 5 minutes to cover the same 8 city blocks. The second settlement was to be at Wiggles Lawyers as agents for Penetrating Trustees – a little less stressful than a Bank settlement thought Lucky Phil. However, after dutifully waiting with the vendor’s agent for 20 minutes without any appearance on the part of the bank (that being Wink Wink) settlement was reluctantly called off. As it would later transpire the Wink Wink clerk was waiting to settle the matter at the offices of Decoy’s Lawyers having been wrongly instructed by Madam Lash – who coincidentally was also the file manager for Lucky Phil’s second settlement.

The third settlement was scheduled at Witch Bank which fortunately for Lucky Phil was located 4 blocks from Wiggles Lawyers. All was going well at Witch Bank when the vendor’s conveyancer (“Mars Bar Conveyancing”) objected to Bank fees for additional cheques. As a consequence I received a telephone call from a gentleman at Mars Bar Conveyancing (he had a Christian name which sounded like a village in Greece or island off Spain – and whom I would later discover was not a man but a woman with a very deep voice). He I mean she delivered a tirade of abuse threatened to obstruct settlement over the charge of $5.40 for an additional cheque to which he or she believed he or she was purportedly entitled. This was the same gentleman I mean woman whom – when she received my Statement of Adjustments earlier in the week decided to correct what she perceived to be an error by preparing her own Adjustments which noted a $2.00 difference favouring my client. The telephone call was not appreciated and my response was simply ‘I’m having a bad day and I’m not in the mood – take it or leave it’. I was later to receive a two page open letter from her wherein she expressed her disgust at my conduct citing both the Legal Practice Act and Table A of the Sale of Land Act to justify her request for a refund of $5.40.

The settlement went through and in the mean time I had been advised Wiggles Lawyers, and Wink Wink were re-booked for the second settlement at 2.00pm. This advice was received from the vendor’s lawyers in Cheeseborough who also demanded a re-settlement fee. My stress levels were running high at this stage and my response to the very kind lady from Cheeseborough who seemed to think I was shouting – was simply ‘Our firm does not charge re-settlement fees nor do not pay them – followed by another – ‘take it or leave it’.

By now after numerous telephone calls to Wink Wink, Madam Lash & Ors, Wink Wink had agreed to reconvene the first settlement at 2.30 pm provided the venue could be at Wink Wink and not the Nudge Nudge Bank. Before releasing moneys however Wink Wink required a Solicitor’s Undertaking that if State Revenue Office had made a mistake endorsing the transfer of land I would be personally liable. I am sure this was to save face however given I was relatively confident State Revenue Office could be relied upon with their assessments, I agreed.

Meanwhile Lucky Phil was being challenged by the Wiggles settlement clerk who accused him of having a defective document. ‘Your wife has failed to stamp the Goods Statutory Declaration’ she advised. Lucky Phil simply smiled and retorted ‘well given we represent the purchaser I don’t think it would be my wife who has failed to stamp the goods declaration’. Upon realising her error she whisked away the document muttered something along the lines ‘I guess we will have to fix that problem ourselves’.

Sometime later, around 3.00 pm Lucky Phil having completed all three (I mean five) settlements for the day rushed onto the train platform and was delighted to catch one of the new Connex trains home. He was hoping for a quiet relaxed ride and upon noticing the carriage was crammed full of screaming school children he immediately alighted and walked to the next carriage. As he pressed the magic button to open the door the trained pulled out of the station leaving Lucky Phil with a 25 minute wait for the next train. Finally upon his arrival back at the office at 4.00 pm Lucky Phil had two minutes to spare to place a bet on the Cup at the Bendigo Races – alas however this was not to be his lucky day as his horse was scratched at the barrier.