An EzineArticle by Luigi Frascati.

The last 150-200 years have been a period of extraordinarily cheap energy. Besides energizing almost all our methods of production, cheap fuels have also seriously distorted our way of living so that most of the middle-class section of the North American population live far away from their places of work. More specifically, cheap fuel and commuting, though expensive in time, meant the coming to reality of social status elements the likes of the ‘American Dream’ – owning a single-family dwelling or the equivalent ‘Canadian Dream’ – owning an interest in land, but distorted to the excess of becoming status symbols. As such, at the bottom of these two elements of economic reality in our social structure lies the fundamental desire on the part of many individuals to obtain some sort of status satisfaction from the social environment in which they live by flaunting their real estate possessions in a rather ostentatious way. 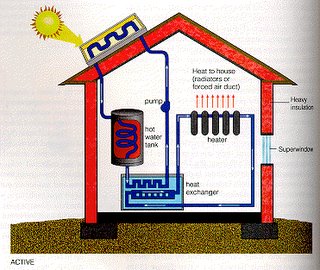 The impact of this attitude has been felt not only on the ever-increasing prices people have been willing to pay throughout the years for the acquisition of real property assets that fulfill and complement their status satisfaction, but also on the very designs and architectures of homes and residential complexes. Thus it is possible to find, nowadays, in many metropolitan centers exceptionally beautiful homes and villas and elaborate constructions, which go well beyond the rather simple conception of the aforesaid dream of owning a home. As cheap energy has fueled this constant social trend in both Canada and the United States these past few decades, if we imagine that energy starts to become steadily more expensive in the coming years then we can reasonably expect that the trend will gradually be reversed and the present separation between home and work will steadily decrease.

Often overlooked, but an important design consideration affecting the total energy used by the home, is the size of the home. Recent statistics compiled by the US Department of Energy show that new homes on average use more energy than older homes, partially due to larger home size, increased use of air-conditioning, and the widespread use of numerous electronics. While home size will likely be determined by factors other than energy efficiency, considerations are now on the drawing board as to whether the same function can be delivered in a smaller package. Smaller homes, because there is less space to heat and cool and less wall area for energy loss, use less energy for heating and cooling than larger homes. For example, in many climates a screened porch can add practical living space without the cost of adding air-conditioned space. Additionally, architects and home designers are coming to grips with the realization that comfort has almost nothing to do with how big a space is but, rather, that it is attained by tailoring our houses to fit the way we really live.

On the economic aspect of things, a recent study undertaken once again on behalf of the US Department of Energy details that home heating costs can be expected to skyrocket in the forthcoming years. For example, the Department of Energy predicts that homes heated with natural gas could see their fuel costs explode by as much as 48 percent by 2007. And the cost of home heating oil could surge by up to 32 percent. As oil becomes scarcer and more expensive there is a high probability that the economic shock waves will hit hard throughout the economy. Petroleum is a basic raw material used in the manufacturing of many products including chemicals, paints, plastics and synthetic textiles. Other industries – steel, aluminum, electric power – use large quantities of oil and oil derivatives in the course of their production. When petroleum supplies become pinched and prices push up, these industries may well be forced to restrict output and raise prices, thus putting even more inflationary pressure on the economy. Scarcely any enterprise is immune to the oil squeeze, as the lessons of the ’70’s and the ’80’s have taught, and real estate is definitely no exception.

As shortage of supply is typically followed by price increase in many economic models, there is a general consensus in many circle that the inflationary cycle will start all over again, prompting the Federal Reserve Bank to hike interest rates. This process has begun already, as interest rates are slowly oozing upwards. An increase in the prime rate means typically a subsequent increase in both passive and active banking rates, that is the rates banks charge for mortgages, credit cards and consumer loans as well as the interest they pay on bond, term deposits and certificates of investment. A question arises, therefore, as to whether an energy crunch – not the mythological real estate bubble – could cause a market slow down and how concerned should people be not just about the value of their own homes, but about the economy of the entire country. Afterall, real estate has positioned itself after five years of continuous expansion as the single most ingrained and relevant market in the economic basket of goods.

The answer is to be found in what economists refer to as the wealth effect. Consumers tend to spend more when their net worth increases and less when it decreases. Economists use this rule of thumb: a $1 change in household wealth leads to a roughly 5-cent change in consumer spending. By that measure, a 10 percent decline in real estate prices would knock about half a percent off the gross domestic product. Even more significant for the economy, though, would be a collapse in home equity lending. The industry has been booming as housing prices have soared. But if prices stop rising, new borrowing against home equity will drop, and may disappear. This is important, because home equity lending in Canada amounted to more than $20 billion last year – or nearly 4 percent of the economy. If all that borrowing – which freed up cash that was spent on new furniture, appliances, vacations, cars and the like – simply vanished, the effect could be large enough all by itself to send the economy into recession. But that’s not all. The housing sector has even broader effects on the economy, by some estimates accounting for 25 percent of all activity. A decline in property values would most likely lead to declines in other industries, like construction, brokerage, banking and insurance. And these are important for future growth.

Construction, for example, amounts to 7 percent to 8 percent of the economy, according to the Economic Council of Canada. Then there is banking. Because of the leverage associated with real estate, a fall in values would affect banks and other lenders. It would probably lead to tightened credit standards, less lending and higher interest rates. If lenders begin to suffer steep losses, there is always the danger of financial contagion, in which problems at one institution ripple out to others it does business with.