Queensland’s major daily newspaper, The Courier Mail, has reported that millions of dollars worth of property contracts signed in that State in the past two months are flawed. 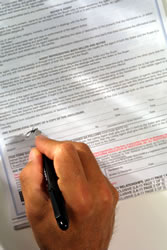 Lawyers have warned that buyers and some sellers could terminate hundreds of contracts signed since December 1, he added.

Real estate agents and some legal firms are alleged to have failed to comply with amended Queensland law containing highly detailed requirements for consumer warnings that are issued with contracts.

Needless to say, the Real Estate Institute of Queensland has urged its members to carefully check all contracts issued since December 1 to ensure they comply with the amended Property Agents and Motor Dealers Act.

Brisbane property law firm Home Wilkinson Lowry, which represents mainly developers, told The Courier Mail that 85 per cent of sales contracts it had seen generated since December were not binding. Griffith’s report continued:

“HWL partner Jason Warat said these included off-the-plan purchases which could be terminated any time in the period before settlement.

HWL warned some contracts could be terminated if the purchaser received a better offer or a developer thought they could get better prices.

The new laws were introduced to provide a five-day cooling-off period on property deals and require contracts to be accompanied by a consumer warning and a disclosure statement from the selling agent.

Outlining the new laws, the State Government issued detailed instructions including how contracts should be delivered in person, by mail and fax or e-mail.

They stipulated not only content and the type sizes of warning notices, but also the order in which various documents were to be faxed.

The law requires the mandatory warning statement to be included as the first document after the fax-header. Complicating the issue is a difference of opinion between the REIQ and ADL Software, a major supplier of forms to the real estate industry.

The two groups vary on their legal interpretation of the amendments.

REIQ chairman Peter McGrath said the new requirements were complex and the industry was over-regulated while ADL owner Alan Liddle said he wouldn’t be surprised if 80 per cent of new contracts were defective.

‘The whole Act should be scrapped and started over again. It is a disaster,’ Mr Liddle said.

He said real estate agents not only risked losing sales and commissions through defective contracts, but also being fined, or sued by buyers and/or sellers.

Fair Trading Minister Margaret Keech said her office and the Office of Fair Trading had embarked on a comprehensive campaign to advise real estate agents of changes.

She said the amendments were introduced after the REIQ identified concerns about the electronic transfer of contracts and asked the Government to clarify the Act.”

*Not reported was my other caustic comment: “This state of affairs will continue until the Office of Fair Trading learns how to draft legislation properly, and the Beattie Government realises that estate agents should have no role on the preparation and signing of contracts.”

The same day this report came out the REIQ President was interviewed on ABC Radio. These are some of his incredible comments:

“Look, we as the responsible industry body for real estate in Queensland certainly support the government in any move to give consumers of Queensland all the protection that they need. We do have a different point of view with the government on how it’s to be done and basically that’s what it comes back to, is that the government in our view are over-prescribing.”

“So what we’re saying is the more paperwork you put in front of them, the less likelihood that the consumer is actually gonna sit down and read it, number one, and secondly, understand it.”

“We, again, highly recommend to any consumer in Queensland that they should take the contracts to their lawyer for perusal prior to signing. That is certainly the best way to protect what they are signing is correct, not only in the formation of the contract, but also that the clauses that are being entered into the contract reflect what the buyer or the seller wishes it to be.”

“You know, most buyers will be more than satisfied with what they’ve signed and it will proceed, but if you have any doubt then you should, in the first instance, contact your solicitor and ask him just to check the paperwork and I’m sure, you know, any prudent solicitor would have already done that when he received the paperwork anyway. And secondly, just check with your agent to make sure that the agent has followed the procedures that the REIQ has laid out for them back on the first of December.”

/2007/05/03/contracts-fundamentally-flawed/[/AREB Comments]
Categorised in: News
« A Conveyancing Contradiction
Tactics Of The Trade »