Section 27 Deposit Release – How to Understand the Section 27 Process

In Victoria it is possible for the vendor of residential real estate to have the deposit released before settlement. The procedure for early deposit release, known simply as “the Section 27” takes its name from Section 27 of the Sale of Land Act 1962. However, the process is not as straight-forward as it might seem.

The purpose of the deposit 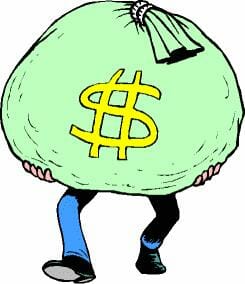 The purpose of a deposit is to bind a proposed purchaser to a contract and so secure the terms of sale.

The deposit acts as security for the vendor and indicates the bona fides of the purchaser. Most estate agents regard the deposit as a preliminary step to the parties entering into a binding written agreement, and essential to establish the genuine intention of both parties.

In practice, the agent signs up the purchaser on a standard form Contract of Sale of Real Estate and this is taken to the vendor supported with a deposit (usually ten percent) for signing by the vendor (acceptance). The deposit, on completion, is treated as a part payment of the total amount due under the contract.

Of course, if the sale is not completed and the deposit has to be refunded, things can become difficult. So pre-settlement deposit release can become something of a balancing act for the person acting as the stakeholder.

Section 24 of the Sale of Land Act 1962 states that the deposit can be held by a legal practitioner, conveyancer or estate agent as stakeholder, and that the stakeholder must retain the deposit until:

“(a)     in the case of a cash transaction, the purchaser becomes entitled to a transfer or conveyance of the land; or

(b)     in the case of a terms contract, the purchaser becomes entitled to possession or to the receipt of rents and profits”

NOTE: What is invariably left unstated is the fact that it is not always possible for a vendor to have the deposit released, and purchasers are under no obligation at all to allow early release. This can lead to frustration and anxiety for a vendor, particularly if the vendor has committed to a purchase and is committed to the payment of a deposit based on an anticipated release of the deposit paid on the sale of their own property.

Some real estate agents misrepresent or trivialise the Section 27 procedure, raising hopes for the vendor and creating difficulties for legal representatives on both sides of the transaction. See the following example of advice provided by one leading real estate franchise to vendors: 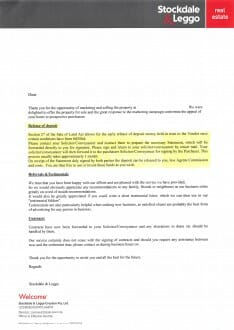 In fact, the Section 27 procedure is fatally flawed because a purchaser can object to early release of the deposit if there are any conditions of the contract “enuring for the benefit of the purchaser“. The Contract of Sale of Real Estate always contains such conditions.

The first step is for the vendor to obtain the information needed for inclusion in the Section 27 Deposit Release Statement, covering the provisions of Section 27(3)(a) and (b) of the Sale of Land Act 1962 which includes the particulars contained in Schedule 1 of the Act (see our page titled “Section 27 – How to Obtain a Bank Confirmation Letter“).

The deposit may be released under s 27(1) provided five things exist:

The purchaser’s notice in writing stating satisfaction with particulars supplied is deemed to be the necessary authorisation for Section 27 compliance.

If the purchaser does not supply the written acceptance within the 28 days and does nothing else, the vendor will be free to release the deposit, and the purchaser is deemed under Section 27(7) to have consented.

In order for a purchaser to stop the release procedure, the purchaser must take positive steps. Under Section 27(6) this requires a purchaser to give the vendor notice in writing stating two things:

With regard to an objection to release, it should be remembered it is only the residue (i.e. the amount left after the estate agent’s commission and costs have been deducted) which will be available under the contract to pay out the moneys owing by a vendor. Careful consideration needs to be given to the calculation of moneys owing and moneys available. Where an insufficient safety gap is disclosed, a purchaser will invariably object. Sometimes, where specific written consent of the vendor’s mortgagee is received that a discharge will be provided, a deposit release can be authorised on the condition the released sum is paid to the mortgagee.

The safest position for a purchaser is to object to early release. This is why most lawyers and conveyancers automatically lodge an objection notice very early in the conveyancing transaction.

Some serious situations can emerge where proper and thorough release procedures are not observed. False information or its reckless supply by a vendor is an offence and, more importantly, gives a purchaser a right to rescind the contract and recover the deposit moneys (see Section 27(8). This is why we always advise vendors to obtain assistance from their bank and a Bank Confirmation Letter in support of their Section 27 Deposit Release Statement (see “Section 27 – How to Obtain a Bank Confirmation Letter”).

What practical steps can a vendor take to satisfy the requirements of Section 27?

We have prepared a dedicated page on this topic. See “Section 27 – How to Get Your Deposit Released“.